KJAM2 was another success with a close final game deciding the tournament once again.

It what will be known for all time as The Battle of the Butchers, Team Britney won the second annual Kaslo Jamboree with a 2-0 victory over Team Bublé.

Britney goalie Mike Guttensohn was the difference, delivering the shut-out victory over fellow meat-cutter-goalie Tim Tyers who had been undefeated in round robin play.

Guttensohn was named the tournament MVP for his efforts. Goal scorers for Britney were Alex Winsor and Curtis Hewatt, both MVP contenders, as was Bublé goalie Tim Tyers. Both Guttensohn and Tyers have cut meat for Britney captain Rick Wiltse at the Front Street Market and both brought the precision and ruthlessness of their trade to the final game. In the end, the elder Guttensohn prevailed, slicing up the younger Tyers like a four-dollar rib-eye.

The other individual awards went to Hugh Kerr for Best Vocalist for his stunning break-out performance at the Kaslo Hotel Saturday night, and Andrea Reimer, who won the Calvin Walker Award for Off-Ice Leadership. Andrea also won Best Goal in the shoot-out contest. The ultimate shoot-out winner was Bublé captain Scott Gillies, who had to go three rounds with fellow finalist Andrea Reimer against a super-hot Doug Yee to decide things.

Britney captain Rick Wiltse is still the only captain to ever hoist the Home Hardware Colander Cup. He captained Patchouli to victory in the inaugural competition in 2009 and in 2010 he Did It Again. To a person, the gathered crowd agreed that this means Wiltse, “will be un#@$&ing bearable.” One of his Front Street Market employees summed it up best. “Torture. That’s what this is: torture.”

Joining Wiltse in the repeat were Ruth Thomson – last year’s MVP, and Dustan Tyers, who claims bragging rights over his brother for 365 days. Few people have ever won the Colander Cup, but these three have won it twice in a row. The question now is, can anyone three-peat? It’s a long wait for 2011, but Britney is in no rush. 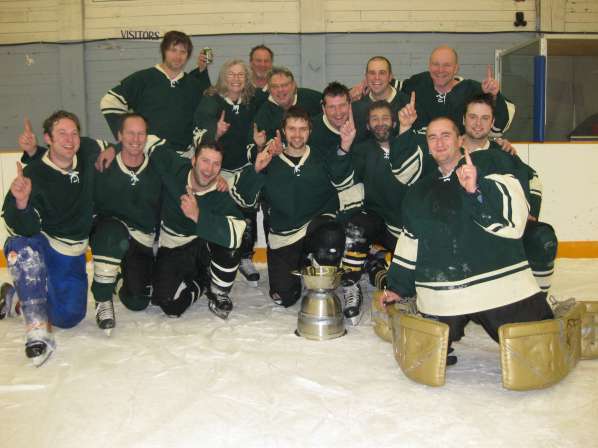 Congratulations to the winners. Thanks to everyone who participated and supported the tournament.